From Walls to Bridges with Story

Story Power can be Used to Disempower and Defeat

Story is part of the human DNA, and integral to our thinking, feeling and acting. Story plays a role in informing how we imagine, relate, access wisdom, and facilitate inquiry.

Story can be therapeutic, motivational, healing.  It can also injure, wound, harm.  A halo that can free and lift us. A noose that can strangle.

Growing threats include global warming, degradation, destruction, pollution, conflict, the decline of scarce resources, shrinking economies, the rise of ‘we first’ patriotism relative to cooperative globalisation, and shrinking personal freedom. In tandem with these threats we see a disquieting development - the emergence,in politics and in the business world, of story that misinforms, manipulates, coerces, divides, demeans, ostracizes and deceives. Witness fake news, astroturfing, Brand stories that pretend at values and principles that are not practised, and downright lies.  Web content creators manage to slip past gatekeepers and spread misinformation and lies. They succeed in these manipulations, and in pushing for and finding fertile ground for the establishment and reinforcement of radical views. Some politicians deviously manage their desired outcomes by preying on fears, promoting 'alternative realities', presenting factoids based on false assumptions. They blur the truth and bolster their own position and interests. (Curtis, A. 2016). There appears to be a spreading of narcissism, a me-first, self-serving that is devoid of empathy. 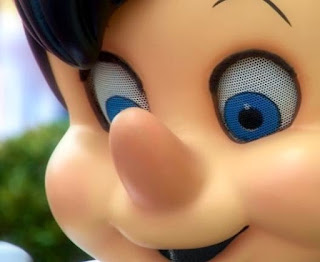 Psychiatrist M. Scott Peck has bluntly proposed the condition of ‘evil’.  A character - disorder possessed by those who feel no love nor empathy yet use emotion as a decoy, cannot accept any form of criticism, hide from their own consciousness and habitually lie to deceive others and project blame, while maintaining a façade (of perfection, control and guiltlessness). People of the lie. (Scott Peck, M. 1988)

Neuroscience has showed that our frontal lobes are involved when we lie, cover up the truth. Unlike Carlo Collodi’s Pinnochio our noses don’t grow longer, but our limbic system is activated and the lie causes anxiety. Is that effect waning in this new age of falsehood and unashamed serving of self - interest at the expense of others?

As we enter the fourth industrial revolution and a palpably more fragile world, how compelling is the need for the development of a framework of story ethics?  How imperative is the need for stories of redemption, stories that enlighten, inspire, bring hope, fuel a passionate response to the pressing needs of the interconnected cosmos, globe, nations, organisations and individuals? Stories that help to close the widening gap between technological capability and raised consciousness.

We Have Reached a Critical Tipping Point

False, disruptive stories are everywhere. And they are increasing exponentially. In elections and referendums, to what extent have FaceBook and Twitter bots been mobilised to disseminate slanted information designed to sway opinion and voter action?  At what level of subtlety have these stories crept under people’s credibility-guards, resulted in the bypassing of the average person’s cognitive dissonance?  To what extent have walls between people been reinforced and erected?  The magnitude of the deceit and resulting challenge cannot be downplayed. "The fact is, that when more panic and insecurity arise in a society, it can easily happen that we lose the higher functions of our humanity, such as compassion, multi-perspectivity, creativity, and rootedness, and find ourselves in fear of survival and the feeling of separation and against one another". (Hübl, T. 2019)

But there is always a reframing waiting to emerge, or an alternative story to be told. A different way of perceiving, understanding and telling the story.

Mass migrations are a case in point. Are they a threat or opportunity? Or both? Dispossessed and displaced people from war torn and impoverished countries have led to enormous resentment, fear and hostility in receiving countries. Perhaps the policies, processes and communication around these unexpected and high-volume migrations leave much to be desired? Yet there is some evidence that the problem could be an opportunity in disguise. Psychology professor Richard Crisp has examined how positive creativity and progress has historically emerged out of major culture ‘clashes’, and how a protective, aggressive reaction to a threat from an outside group can be beneficially substituted by non-dual, coalition thinking, and by a considered response that stimulates positive forward movement.    (Crisp, R. 2015)

A number of people have recently voiced to me their disquiet with their formal church institution where they like the song but not the singers. Walls here too. I became involved in an acrimonious, Karpman Triangle situation within a church where I was offering pro bono services in a key area.  And rediscovered why I left the institutional church. Why so many are disconnected and lonely. Why I seek and practice my spirituality on my own except for a few trusted friends that I meet with from time to time, usually on a one on one basis. My sacred group! Within the institutional church the intensity of self-interest above community interest, turf protection, and petty power plays can be quite as scary as in a toxic big corporate. Only the facade is different. The exclusion of those who don’t toe the party line, don’t fit in, disagree on an issue or put forward a suggestion that isn’t palatable, is so sad.  I of course was one of the contributors to the misunderstanding, but the accusatory backlash, cold-shoulder response was quite shattering.  ‘Tis the season of peace on earth and goodwill to all men except maybe those that are not sufficiently compliant?  Surely, here of all places is where inclusion - equity – belonging should be modelled? Shame!

Perhaps a more appropriate metaphor for our times, rather than walls, is that of a bridge.

Even when there are apparent, glaring incompatibilities to be bridged.
Two turbulent Mexican artists, Diego Rivera and Frida  Kahlo, who were married to each other and were in many ways not compatible, lived in adjoining houses in San Angel, Mexico City.  The architect designed a home made up of two independent concrete blocks linked by a narrow bridge that joined the rooftops. A red block represented Diego, a blue one Frida. The bridge that united them was the bond of love. 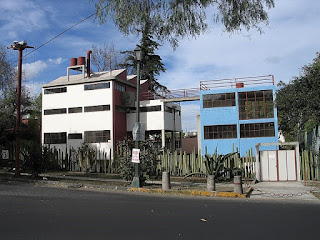 (San Angel Casa Rivera Kahlo)
Challenges at every level are often complex, tangled webs of incompatibilities, influences, interests, uncertainties, fears, possibilities and perceptions. (Anaïs Nin is reported to have said, "We don't see things as they are, we see them as we are”).   Yet story is able to play an important role in the evolutionary dynamics of self, and cultural and societal norms.   By informing how we think, feel and act. By following the principle of transcend and include.

Stories can, in a sense, act as our corrective “thought police”. If they are told and heard. As Dietrich Bonhoeffer said, “Not to speak is to speak”.
And as always, the best place to start is with the individual… where in a disrupted and besieged world, confusion, fear, self-judgment, guilt, narcissistic intrusions, self-criticism, anger, shame seem to have reached epidemic proportions …
Bridging the Walls - Within first
Bob Marley’s Redemption Song speaks of our inner work being the route to freedom:
Emancipate yourselves from mental slavery
None but ourselves can free our minds
Our fears, prejudices, limiting beliefs, biases, habitual patterns of thinking, self-judgment, hidden privileges that unconsciously boost ego (our internal fake news) …  not stilling our inner critics, soured relationships, a perfection drive (not feeling ‘good enough’), any harsh inner communication with ourselves - these are all stories that detract from us becoming fully human, and wound our spirits (individually and communally)
If we can shake off these shackles, rely instead on ‘possibilist’, freeing and healing stories, then game-changing is possible. We move away from enmity, ‘we-them’, and false esteem via overvaluing the extrinsic. Away from powerlessness, fear, despair, mindlessness …. to mindfulness, acceptance, equity, inclusion and belonging. To ‘us’, true esteem and purpose via the intrinsic. To empowerment, accessing and using our multiple intelligences, to embodying compassion and hope. 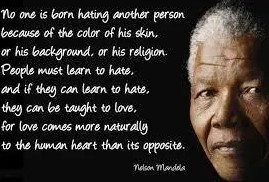 Steve Bánhegyi encourages us to envision overcoming false and dark narratives by not seeing them to be immovable, impenetrable objects, but rather as possessing qualities that allow bridging stories over and through. The Great Wall of China served also as a transportation system. A road and a wall. Certainly, a vertical wall tilted 90°becomes a horizontal autobahn that ideas can speed across! And maybe because walls are porous they selectively allow certain things to filter in while keeping other things out - analogous to our discerning, protective immune systems, our language and cognitive functions that both accept and discredit/ reject according to our perceived needs?  (Bánhegyi, S. 2019)

Through story we CAN remove, climb over or pass through imprisoning walls within and without. And build the bridges that the world is crying out for right now. Tap into the energies of hope, healing and love. Fuelled by compassion as we live our stories.


Right now we are liminally poised in antenarrative space, a concept developed by a friend, David Boje. (Boje, D. 2019).
Which stories of redemption, hope and connection do we wish to tell, actively engage with, live, and see emerge?

References
Angelou, Maya (1978) And Still I Rise: A Book of Poems  Random House

Posted by Graham Williams at 2:21 AM 1 comments