“Life is a bitch. And then you die” is a quote sometimes attributed to Hollywood legend Mae West. Here is a life that could well have confirmed that sentiment.

Russian Tamara Cheremnova had cerebral palsy and was abandoned by her parents to a lonely life in an orphanage at age 6. She lived there for 12 years under atrocious conditions, and incorrectly diagnosed with learning difficulties, was sent to a psychiatric home where conditions were also awful, and she was effectively isolated and imprisoned for the rest of her life.  She has said that she felt a “searing shame”.
Tamara was depressed, suicidal, had to come to terms with who she was, what she wanted …  “I am lying in bed all bent and disfigured. I have no future. I was biting my lips and choking on my tears”.  She needed existential sense, to find a reason for living, and “Somewhere deep inside was a seed of hope”

She nourished her inner self through reading, knew that her diagnosis was wrong, and determined to overturn it. Tamara wrote fairy tales. One letter at a time. Eventually the day came when she achieved this. She was published. Won awards. Became known to the outside world. At the age of 62 she was adopted. Natalia Vasilenko was convicted to become Tamara’s carer – not an easy task. She was from a very poor home and with her husband had adopted orphans after her own children left home.

So Tamara has come home and now belongs in a family. She is known as the storyteller of Siberia. Tamara says she has always known what love and suffering are. In her dreams she saw the house in which she now lives.
It is a true-life fairy tale. Tamara smiles a lot. 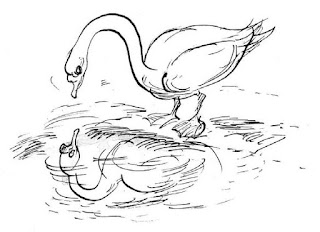 Posted by Graham Williams at 1:24 AM 0 comments