The Healing Power of Story

Storytelling Therapy in Counselling, Coaching and Training: in person and via videoconferencing

Our guest blogger, Dr Eric Miller gives training in a form of Storytelling Therapy and also uses this method of therapy in his work as a psychological counsellor -- both in-person and via videoconference. He also conducts workshops in Storytelling and Story Writing: 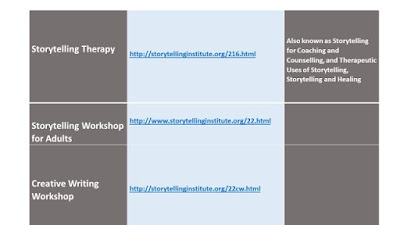 Eric’s work is primarily with teenagers and adults.  In this essay he shares with us some of his insights.

The Arrival of Story Therapy

Story can be defined as a series of events.  Storytelling can be defined as relating a series of events (to one or more people in a social gathering).  It has become popular to refer to any communication of story as storytelling -- for examples, it is sometimes said that a particular novelist or cinema director is a fine storyteller. Literally, however, storytelling refers to primarily using voice and body to relate a story to people who are present to each other, and who can give near-instantaneous feedback to each other.

Storytelling has the same healing property that results from any process involving people being together and cooperatively developing something.
A story can be a model of the past, and a model for the future.

What Story Is and How Story Works

A story can be a symbolic object that one can approach.  One can get into it, and one can let it get under one's skin.  A story can do its work on a person.  A story that is embraced and loved by a person moves that person towards specific cultures, belief-systems, and communities – by its power to enable insight, foster assimilation and accommodation, and to move emotionally.

Stories give examples of behavior, and presenters of stories tend to communicate their feelings about these behaviors, thus urging listeners to also see things the same way.  Thus, telling a story can be an attempt to persuade one's listeners to understand experience the same way one understands it.  In therapy, story is client-focused and “ … whereas valid story activity may take place in all three ‘zones’ - movement towards or being in the green zone in the chart below (where listeners are free to interpret, gain their own insights) is preferable to movement towards the red zone (where there is the danger of promoting self-interest, trying to impress rather than express, seeking to convince, even manipulate)”  (Williams, G. & Gargiula,T.L. 2014) 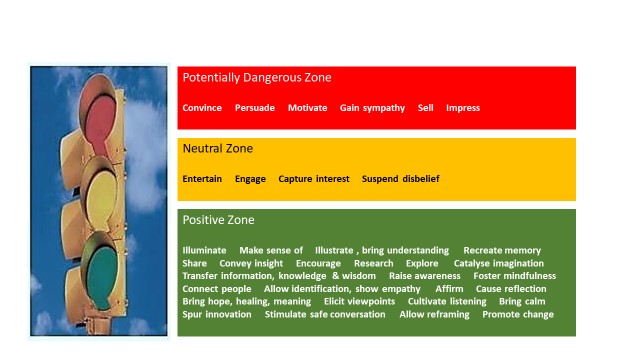 The words "narrative" and "story" have similar meanings. However, one way they differ is that narrating involves just telling what happened, whereas storytelling can also involve acting-out characters (letting characters speak for themselves).

·         Narrative Therapy focuses on assisting the client to frame and reframe his/her Life Story so as to emphasise one's coping methods and resiliency, and social-cultural beliefs by which one may be influenced. (Wikipedia)

·         Narrative Medicine is "a medical approach that utilises people's narratives in clinical practice, research, and education as a way to promote healing." (Wikipedia)

I use Storytelling Therapy as an umbrella term for all therapeutic approaches that involve Narrative Psychology, Archetypal Psychology, and Metaphor Therapy.

·         Narrative Psychology is "the study of ways humans construct stories to deal with experiences." (Wikipedia)

·         Archetypal Psychology "concerns the deepest patterns of psychic functioning, the patterns that animate human life.  Archetypal Psychology likens itself to a polytheistic mythology in that it attempts to recognize the myriad fantasies and myths – regarding gods, goddesses, humans and animals – that shape and are shaped by our psychological lives." (Wikipedia)

·         Metaphor Therapy "uses metaphor as a tool to help people express their experiences symbolically.  Metaphors can involve spontaneous processes within a client's mind, having to do with both the client's consciousness and unconscious."(Wikipedia)    Metaphors go deeper than the conscious / rational / logical level.  Metaphors can connect one to nature, a culture, and a community (Perrow, 2014).

There is also the field of Narrative Coaching, which is "an experiential and holistic approach that helps people shift their stories about themselves, others, and life itself to create new possibilities and new results.﻿"  (Moment Institute)

The form of Storytelling Therapy I am helping to develop is based on the 3 steps of Carl Jung's therapeutic method (Adams, M.V.):

1)    Explication.  (Analysis of the client's Life Story, and of episodes within the Life Story)

2)    Amplification.  (Association of other stories with a client's Life Story)

3)    C3) Creative Imagination.  (Role-playing, that is, speaking to and as characters in the above-mentioned stories, and in imaginary stories.)

The 7 Steps in Storytelling Therapy

The 7 steps of the form of Storytelling Therapy I am helping to develop are (Miller, E. 2017):

1) The client tells his/her Life Story (the Story of his/her Life) -- as well as why he/she has come for counselling.

2) The client identifies outstanding themes, turning points, and archetypal objects, relationships, and situations in his/her Life Story (with assistance from the facilitator if needed).
(Jung's Step 1.)

3) The client gathers stories that are similar to his/her Life Story, and to episodes within this story (with assistance from the facilitator if needed).
(Jung's Step 2.)

4) The client plays with (changes, adds to) any of the above-mentioned stories.

5) The client role-plays (speaks to and as) characters in any of the above-mentioned stories (with assistance from the facilitator if needed).
(Jung's Step 3.)

6) The client develops metaphors relating to the above-mentioned stories (with assistance from the facilitator if needed).

7) The client develops a healing/guiding story for him/herself (with assistance from the facilitator if needed).

A healing/guiding story may be directly and immediately therapeutic, or it may be designed to assist the client to enter the next stage in his/her healthy development.

The healing/guiding story may involve integrating various aspects of the client's personality and experience (Jung called this maturation process, "individuation").

Helping a client to compose a healing/guiding story for him/herself may involve teaching ways of composing stories -- which I also do in my Storytelling and Story Writing Workshops.  In the process of composing this healing/guiding story, the client may use one or more of the 14 Story Composition activities I use in my Creative Writing workshops, including describing and discussing: dreams, daydreams, one's personality traits and emotions, social and environmental issues, something interesting that occurred in the past 24 hours, etc. (Miller, E. 2019)

An integral and vital part of the process is listening. The storyteller/ therapist is also a story listener, applying attentive, unfiltered, non-judgemental listening with unconditional positive regard, so that the client feels listened to, accepted, heard, embraced and valued.

The general creative method I train people in is: start with your own experiences, and then develop fantasies around them.  In this regard, an acronym that may be useful is, ROQI -- Remember, Observe, Question, Imagine.

A key aspect of this version of Storytelling Therapy is that ideally,
1) The client comes up with metaphors and a healing/guiding story for him/herself -- with the therapist/coach/facilitator assisting, if needed.
2) Then the client tells this story to other people in his/her life, and leads conversations about this story with these listeners.

·         "Budur and the Moon Rabbit" (Denton,T.2017).
Involving nature, the universe, and the client's memory of her mother.  This healing/guiding story was composed by the client.

Published in 1845, Hans Christian Andersen’s healing/ guiding story, the Ugly Duckling, is referred to by Clarissa Pinkola Estés as “a psychological and spiritual root story ... one that contains a truth so fundamental to human development that without integration of this fact, further progression is shaky ...”   She illuminates, “… when an individual’s particular kind of soulfulness, which is both instinctual and a spiritual identity, is surrounded by psychic acknowledgement and acceptance, that person feels life and power as never before. Ascertaining one’s own psychic family brings a person vitality and belongingness”. (Estés, C.P. 2008) 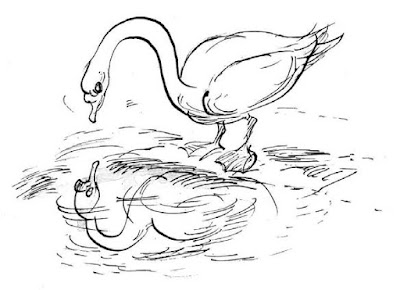 The "in-performance transference process" (IPTP) occurs when a storyteller speaks as a character who is addressing another character.  When this occurs, one's listeners are put in the position of the character being addressed.

This relates to Step 5 of the Storytelling Therapy process: "Role-play, speak to and as characters in any of the above-mentioned stories" (from one's memory and imagination).

The IPTP is different from the type of transference that is more popularly referred to in the field of Psychology: namely, that in the relationship between a client and a therapist, the client may come to see and treat the therapist as the client's father and/or mother.

Both of these types of transference can be used in healing ways -- including by helping clients to see situations from various figures' points of view, and to develop understanding of and empathy for each figure.

The Video-Conferencing Format for Training

Videoconferencing strikes me as epic and heroic.  It is such an accomplishment -- both for humanity in general, and for the individuals engaged in a videoconference -- to be able to (near-simultaneously) transmit and receive audio and video.  When a videoconference works (technologically), it is thrilling; when it doesn't, it can be extremely frustrating and disappointing.

Thus, it seems to me that a sense of triumphant achievement generally colors the providing of services (such as training and counselling) via videoconference.

I have a long-term love for the medium of videoconferencing -- I have been using it, and researching and writing about it, for over 25 years. (Miller, E. 2017 & 2019)  I find that if one can develop the give-and-take and the back-and-forth of conversation with the other individuals involved, one can overcome distances of any sort between people.

Both my counselling clients, and my storytelling and creative writing students, start with memories of their experiences and develop these memories into imaginative fantasies.

The counselees come for wellness and are encouraged to enter the realm of art.  The story students come for art and may increase their wellness.

Creativity -- exploring, expressing, and sharing oneself, in direct and symbolic ways -- can in itself be healing and healthy.  So can coming to terms with who one is, and with what one conceives to be one's place in the universe.

One take-away (for the client) of an 8-session "Storytelling Therapy" counselling experience is a healing/guiding story.

(A version of the story therapy process may be applied in a small group setting, where participants experience growth in a supportive, psychologically safe place where their voice is heard and insights are shared). 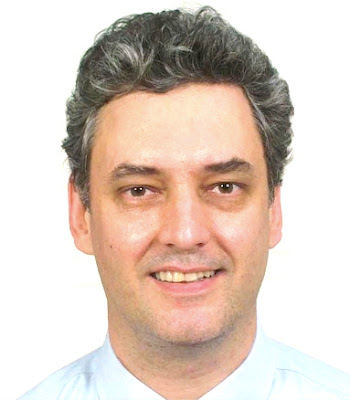 Dr Eric Miller is a native New Yorker, settled in Chennai (on India's southeast coast).  Dr Eric has earned a PhD in Folklore (University of Pennsylvania), and a MSc in Psychology (University of Madras).  He has also completed in a one-year course in "Psychological Counselling" offered by the Chennai Counsellors Foundation.  He is the Director of the World Storytelling Institute; and is the Assistant Director of the East West Center for Counselling and Training, and the Indian Institute of Psychodrama.

Posted by Graham Williams at 6:14 AM